One of the aspects I love being captivated by while I watch anime is without question the episodes’ structure, a fundamental piece in the general direction.
Are Opening and Ending always included? What kind of framing closes the episodes? Are there insert songs? When talking about adaptations, is the narrative pace of the original material kept? How are treated captions?

These are some of the questions I ask myself and, more realistically, these are the problems the storyboarder (Ekonte, 絵コンテ in the credits) must face. He is in a certain way the true Master of the episode. If his style is appreciated by the director and understood by the other staff members, we viewers end up enjoying something really similar to this position’s imagination. It’s him who puts the OST inside an episode, who decides if there’s need to get rid of a song, who gives indications to the Art Director and the Animation Directors. Usually who works on the ekonte is limited by the staff at disposal, by schedules and budget but the product I want to talk about today doesn’t have any of these possible problems. Not only that, but director and storyboarder are the same person, so that any possible mistake made by different autorships regarding the stylistic choices are avoided. In this article I’ll show you some of the original direction elements that I loved the most in this animation series.

YKK is directed by Takashi Anno, at the time already an important veteran in the industry e by some one of the most important directors of the Showa era. What’s certain is that he was able to survive countless transpositions of long length, we’ll cite the most important being Maison Ikkoku, Kimagure Orange Road and Magical Star Magical Emi.

Yokohama, on the contrary, was being made in the, by the time, declining format of OVAs, from a director who wouldn’t have directed any more important works and, guess what, one of the main themes is the “sweet apocalypse” that doesn’t give any future. The only thing to do is to is to cheer up and live by the day.

The anime starts with an Opening that focuses exactly on the present: introductive animation, title, and quickly it begins with showing the daily life of the protagonist by short cuts and her real thoughts by an interior monologue that leads us to the premises of the episode, a bit like a synopsis. The Ending sequence works the same way, but the represented situations are bit more intimate and our little robot’s monologue is almost philosophical. From the depths of my heart I tell you that I’ve never seen such a sober and functional way to open and close an episode. Really unique in its own genre.

It’s shown to us then certain introductive shots that will be reused later on en masse through a really particular technique in its genre for how many times these intermission cuts will be suggested again. They reminded me that kind of feeling one gets when he goes on holiday in a completely new place: starting by becoming familiar with the surroundings, he sets new landmarks in completely different objects and after walking past it ten times or more they seem like part of daily routine. A bit like visiting the Café as tourists, we will never truly know Alpha, our guide and main character, but we will surely share unforgettable moments with her, just like the best kind of holidays. Another valid motivation for these continuous shots is the role of photography in this anime and taking care so much of the chosen subjects ends up being a great tribute to one of animation’s ancestors and is clearly able to show what are the true potentials of a storyboard following the harmonious rules of photography. 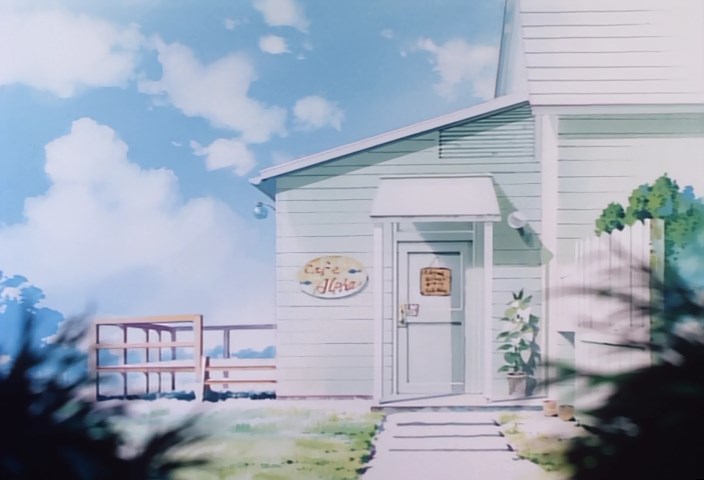 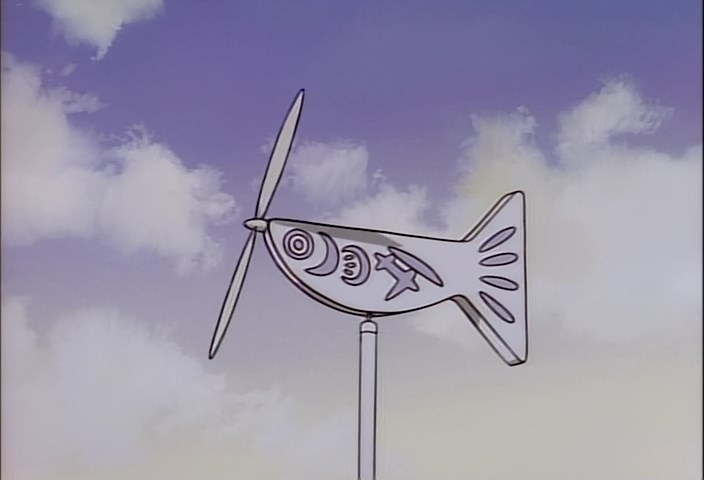 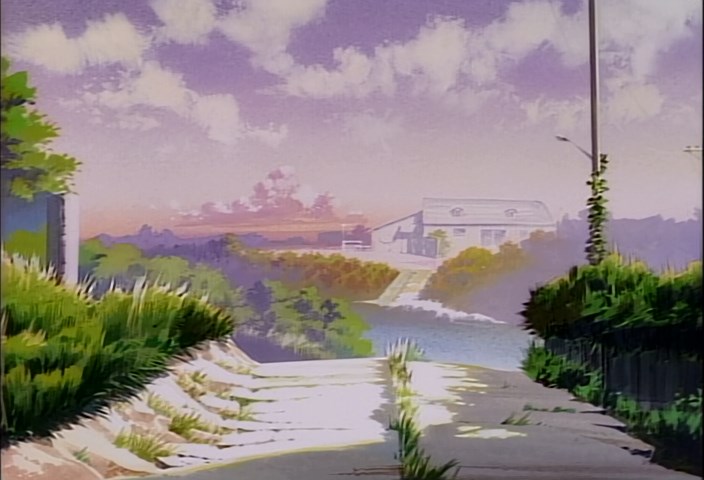 We end up looking at an interesting set of shots; Kokone, the pink-haired android, is being pictured continuously through long shots during her walk that brings her to Alpha’s home. All of this would be extremely tiring in real life and it would translate very well in boredom would it be a movie. However, thanks to the care taken towards the colour palettes, thanks to the attention taken on the different elements in every shot and thanks to the sound design this scene several minutes long is delivered quite pleasantly. Since even Kokone starts enjoying her walk, maybe what it’s shown to us in these cuts are her emotions and her feelings but from our perspective, like we were empathizing with her even if we don’t know her yet. 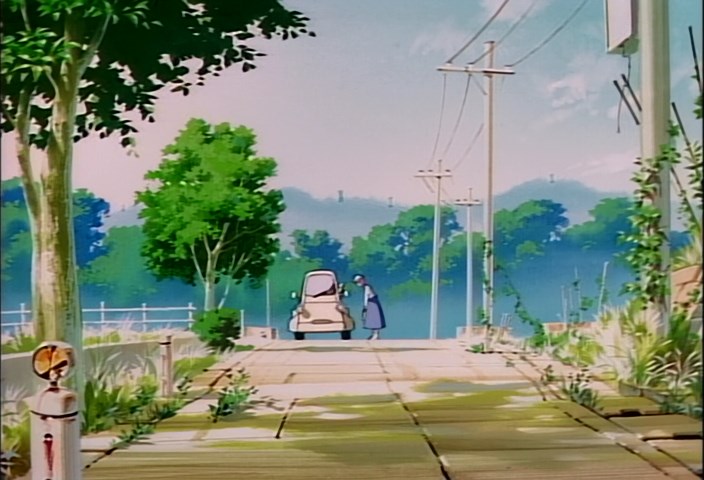 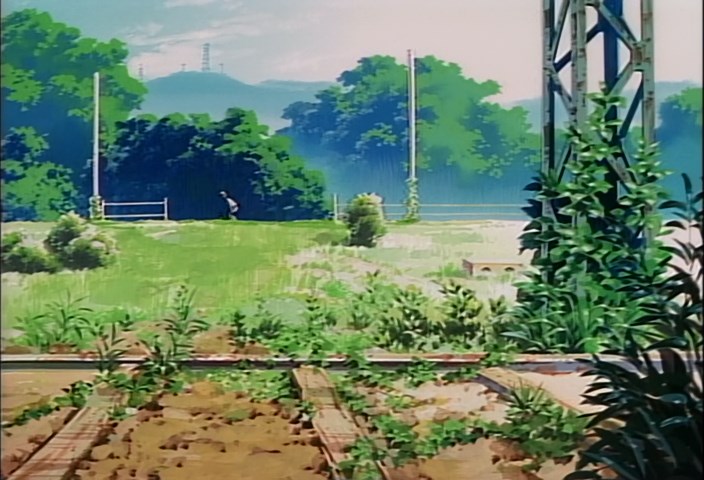 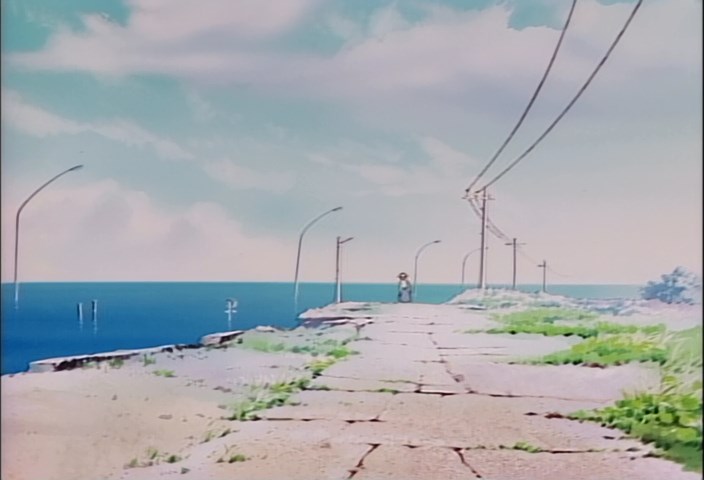 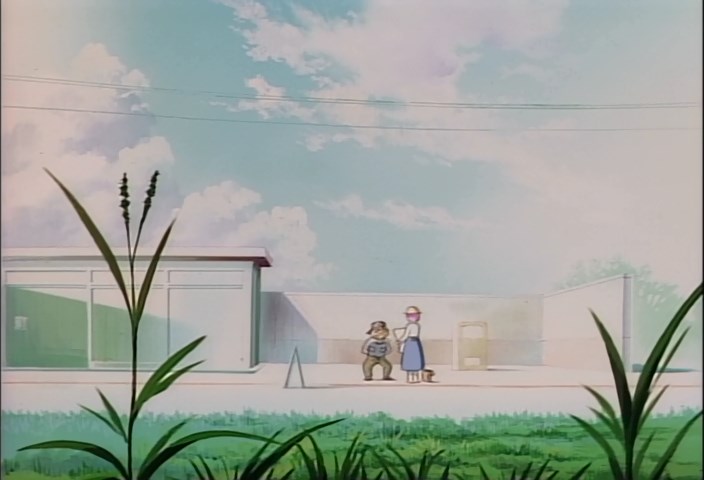 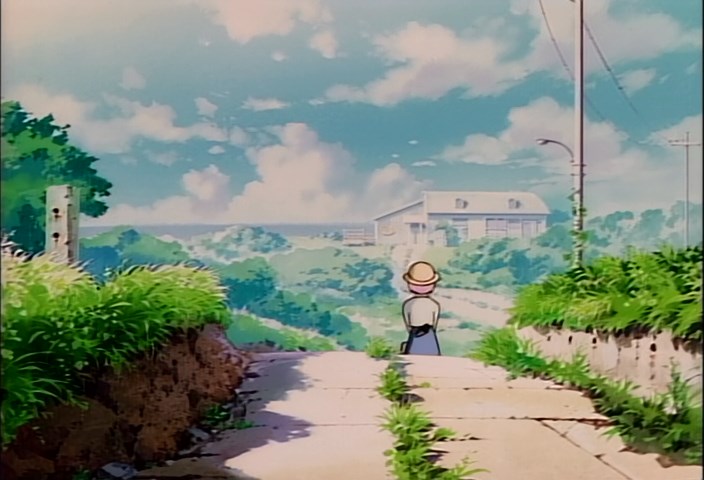 Another aspect that really struck me is how the layout in the sequence where Kokone explains how to use the camera works is extremely simple compared with the previous and the following scenes, as if reducing the number of information not necessary to transmit the better the feeling of concentration of the scene. This is also a little trial for Alpha, maybe the only moment of tension in the whole OVA. 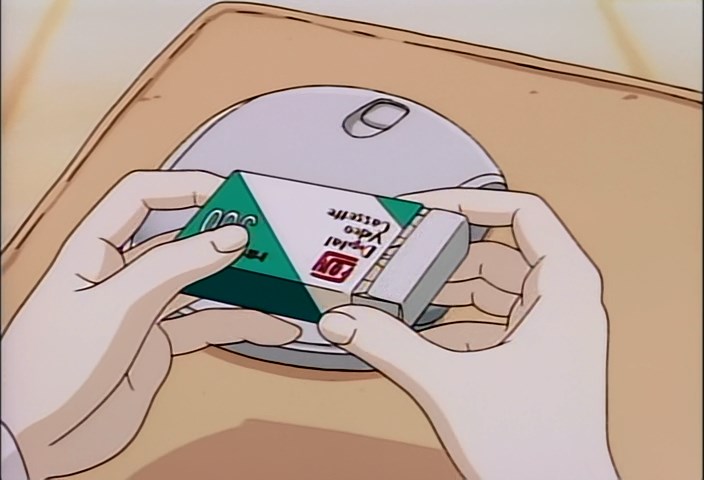 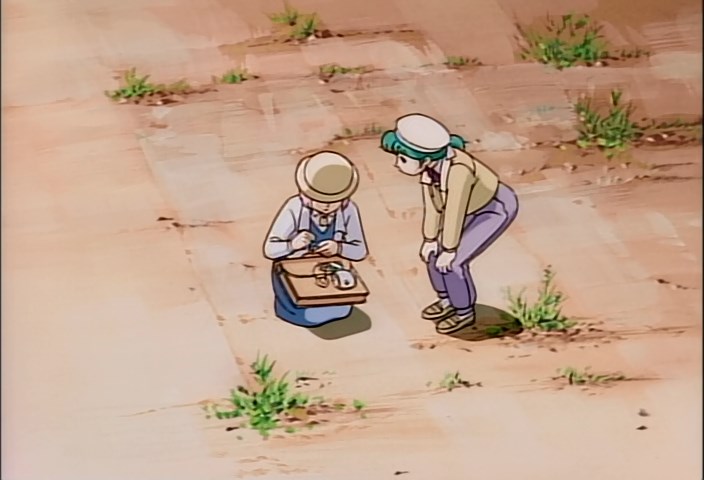 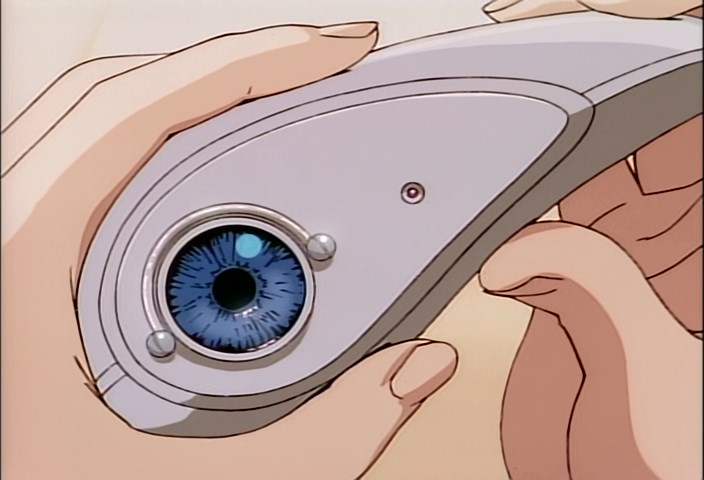 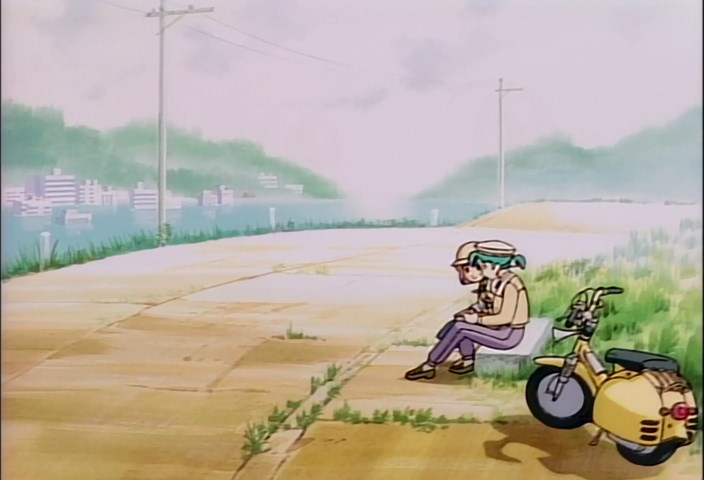 In the middle of the episode, when the chapter to transpose is over, we’re met at a quick pace with the pictures Alpha took between a repeated animation of a wave hitting the shore and some bubbles, together with several illustrations with a very similar visual composition. The sequence’s rhythm, so rapid, reminds of how quickly the first kinds of digital cameras would register the picture in its internal memory to return operative. All of this with a pleasant song in the background, similarly as in End of Evangelion with Thanatos: if I can’t be yours. 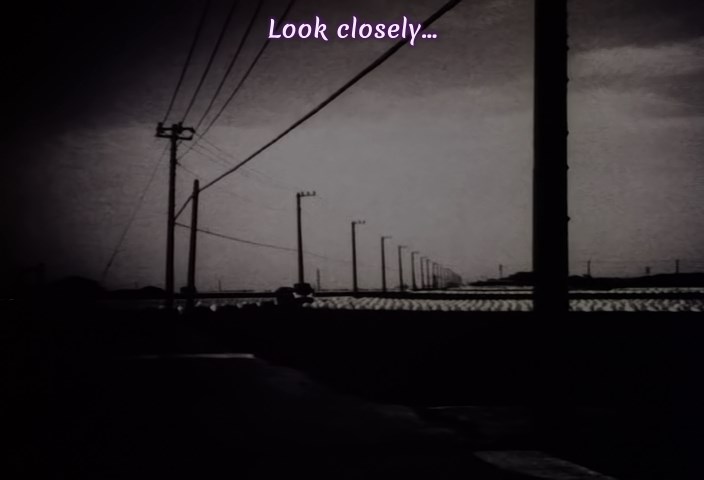 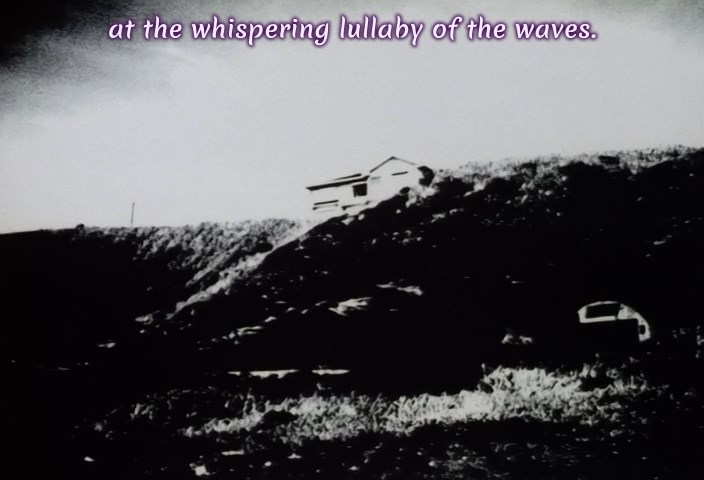 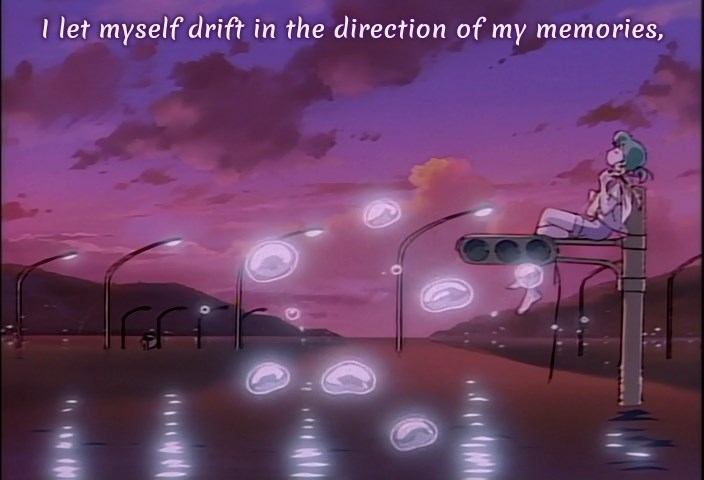 In the episode’s second part Alpha is able to take just one picture, the one portraying her scooter. It looks really interesting to me noticing how, even if it is a static object, the heroine’s means of transport was painted using a cel (a kind of transparent paper in acetate) and not being directly inserted into the background, so that to make its colour tone resembling very much of the protagonist, that just like all the other characters was painted on acetate. Our robot girl can take without even thinking about it her travel buddy because she has an emotional attachment with it, it’s hers. On the other hand, the light poles emerging from the sea are something for her that are part of the environment and that, ironically, were and will always be there. They are not worth of note to her but they represent for us viewers something we must remember, taking us away from the android’s for the first and last time in the episode. This is why the coast is painted leaving much space to less dominant shades for the shot, like any great artistic direction of the most captivating moments lacking relevant sources of light. 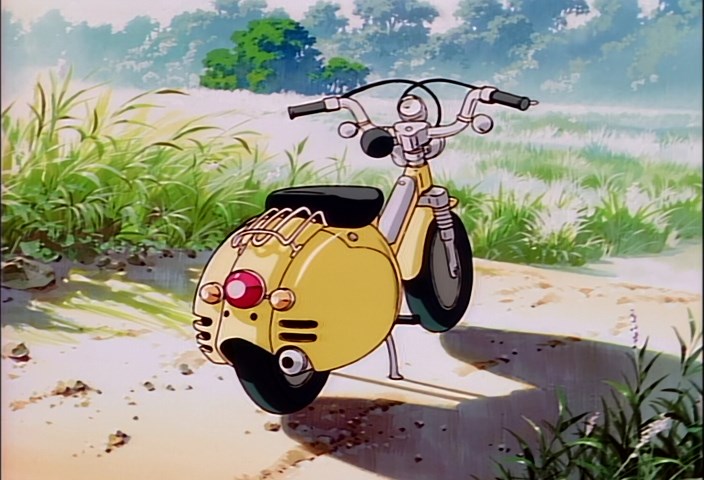 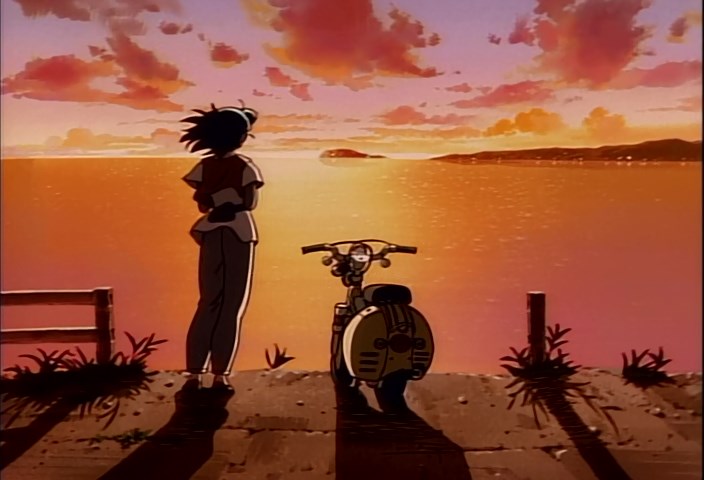 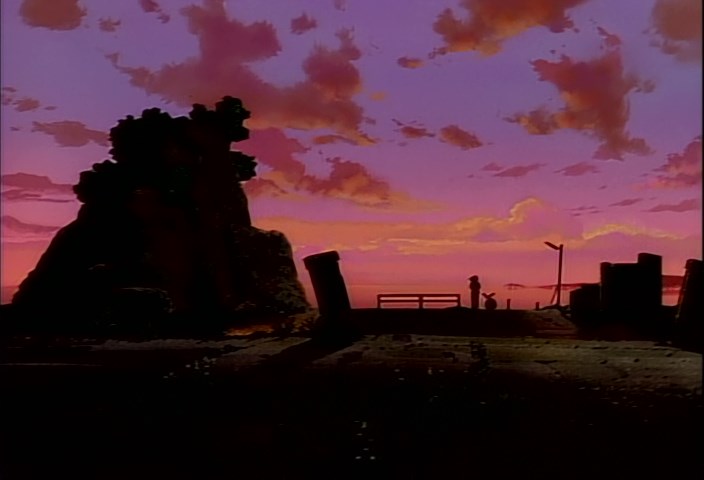 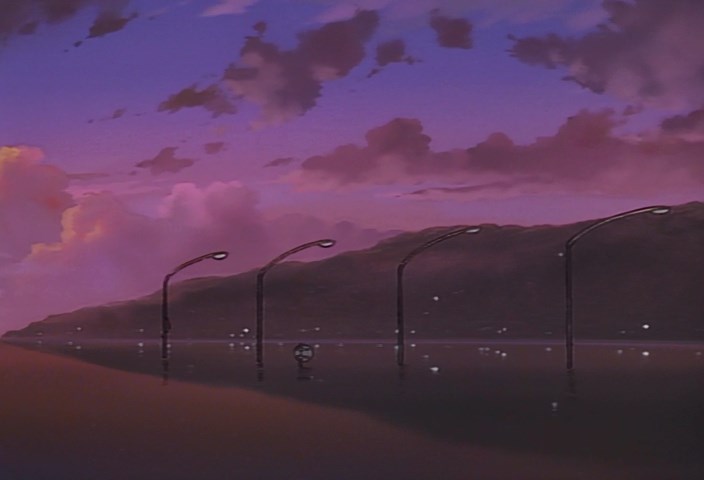 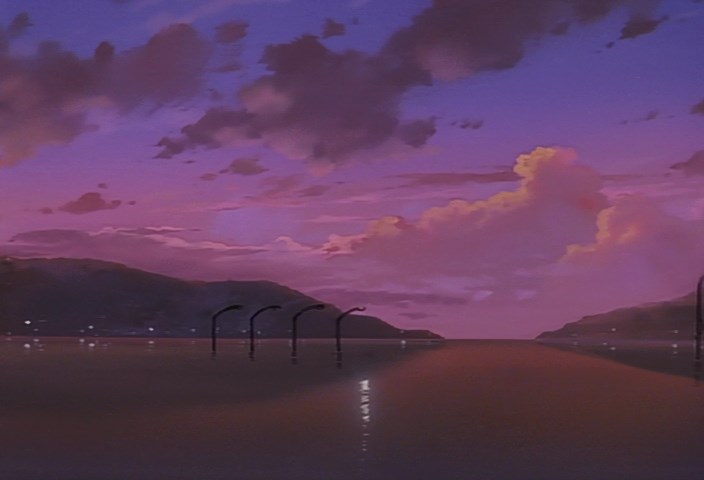 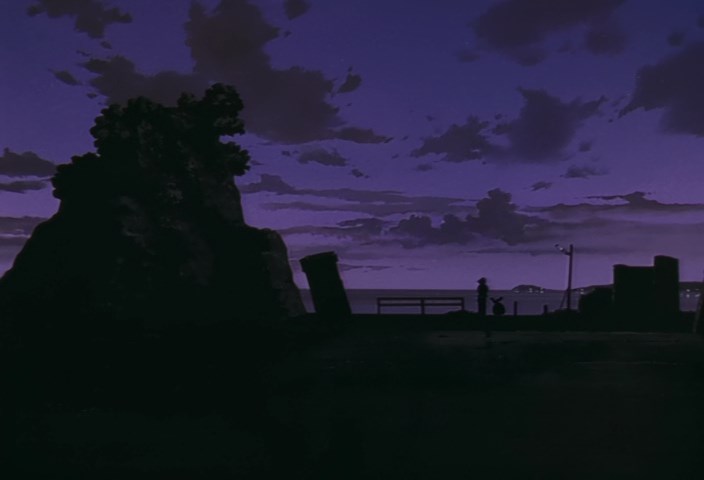 One last cool thing is how they put the captions superimposed pointing at the days of the year the episode is set. Excellent way to remind the existence of the apocalypse that ruined YKK’s world without ruining the general atmosphere of the anima, too much pacific and relaxing instead of any other sort of storytelling. 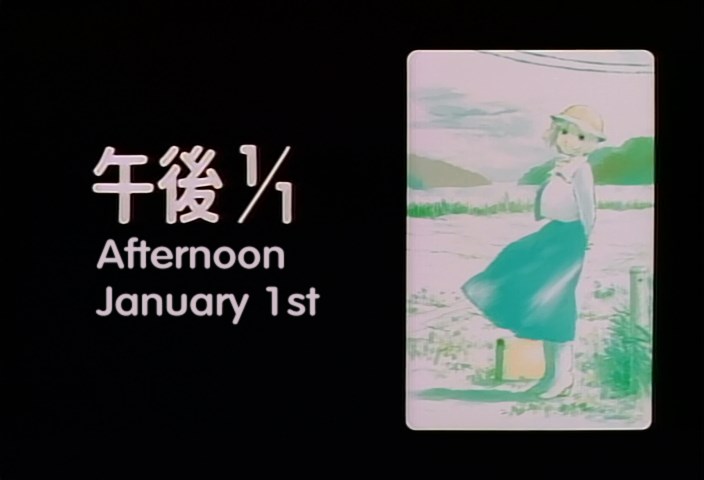 Huge Thanks to Emanuele Petrosino who translated this article in English!